I was reading something in a magazine about guilty pleasures the other day, and saw things that I liked mentioned. Not things I liked ironically, or things I liked that I know are bad, but things I really liked. It got me thinking…who defines what a guilty pleasure is? If it makes you happy it can’t be that bad, I mean — oh my God, I just quoted Sheryl Crow. You can all email me as to whether you’d rather slap me in the face or kick me in the ass.

Anyway, the point is I don’t feel that guilty about things I like, pop culture-wise. However, the more I thought the more I realized there are some things I enjoy in the privacy of my own home that I might be embarrassed to get caught enjoying in public. And so today, dear readers, I have some confessions to make.

Movies – At first, I had a hard time thinking of a specific movie that is a guilty pleasure for me. It’s more a genre than a certain movie : as I’ve discussed before, I love horror movies.  Even the crappy ones. I feel like a little kid bargaining for a later bedtime when my wife tells me to turn it from the stupid slasher flick I’ve turned on halfway through, and I beg, ‘C’mon, I just wanna see one death scene!’

I also have a soft spot for really stupid comedies, but I don’t feel all that guilty about those.

But then I did think of one particular movie, and I can’t believe I’m admitting it. One of my wife’s favorite chick flicks is the movie Return to Me, starring David Duchovny and Minnie Driver. The plot is a little farfetched. It’s not incredibly funny, but it has some funny parts. It’s not terribly mushy, but it does start to get a little gushy toward the end. But it’s actually a very sweet movie, it has some of the gruffest old bastards you can imagine in warm supporting roles (Carroll O’Connor, Robert Loggia, and William Bronder), and it was written and directed by one of the costars, the terribly underrated Bonnie Hunt.

I used to put on an insufferable face when my wife would flip to it on a lazy Sunday afternoon. After seeing parts of it, I realized it really wasn’t as bad as a lot of the chick flicks out there. One year, I bought it for her on DVD. To this day, she thinks I’m playing games on my iPad when it’s on, but that’s just for show. If your wanting to feel in touch with your sensitive side, you could do worse.

Plus, the more she thinks I’m letting her watch it against my will, the more she’ll let me watch Walk Hard: The Dewey Cox Story

TV – This one was a no-brainer. Hell’s Kitchen.

My wife and I love cooking shows. We watch Food Network and Cooking Channel all the time, and sometimes it feels like we’re just killing time between seasons of Top Chef. But Hell’s Kitchen is the worst, and I eat it up.

It has idiots, losers, smartasses, and Gordon Ramsay tearing them all a new orifice. It’s trash TV, but I can’t help it. It’s like crack coming over the airwaves; I just can’t wait for my next hit.

Music – This one is the hardest for me to admit. Even though I like nearly every single type of music, I really despised ’80’s glam rock, aka ‘Butt Rock’. The catch was, I had to suffer through that crap for the chance to possibly hear or see the harder stuff I really liked on the radio or MTV (ie., Metallica, Slayer, Ministry, Helmet). So, although I can’t stand most of it, I’m quite familiar with that coke-laced, Sunset Strip big-hair crap.

But one song broke through.

Still of the Night, by Whitesnake. Now, I never minded seeing Whitesnake on MTV, but that’s a completely different story, as a lot of guys my age will probably understand. 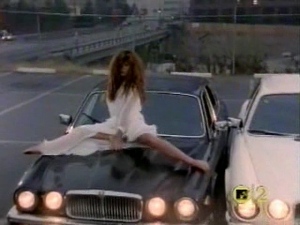 By and large, though, I didn’t like their music. Except for Still of the Night. To this day, if that song comes on while I’m in the car the radio gets blasted and I unrepentantly rock the hell out. If anyone caught me listening to it, I’d be mortified. But I can’t help it. It’s a good song, dammit.

I’m curious if anyone else has the gumption to share their guilty pleasures – by all means, let me know in the comments. In the meantime, in doing a little research before I started writing this I found that Still of the Night is only $0.69 on iTunes. My wife is going to kill me.