After filling out the ‘Which Johnny Depp Character Are You?’ quiz for the third time because I wasn’t satisfied with the result I was getting (I was hoping for Donnie Brasco or maybe the guy from Blow, not Jack Sparrow), I grew a little frustrated. I’d seen friends of mine on Facebook saying they also have taken these various personality quizzes more than once to get the answer they wanted, and others who said they purposefully gave certain answers to try and manipulate the quiz to get the desired results.

That got me thinking about who people tell me I remind them of, and wondering what you guys have been told. That seems far more interesting than who Zimbio or Buzzfeed tells me I am. Here are mine.

Who I’ve been told I remind people of:

I’d like to think I’m a little more intellectual than Mr. Lebowski, but at its purest level I think this is somewhat accurate. I’m fairly easy going, don’t care for The Eagles, and love bowling. At one point in time there may have been other similarities, but that’s neither here nor there. It doesn’t help matters that I also received a robe for Christmas. That’s alright, I suppose there are worse people to be compared to.

I believe I was told I reminded someone of him because of the combination of  physical similarity and personality. I do bear at least a slight  resemblance, what with the physique, beard, and glasses, so when you factor in the immense talent, storytelling ability and acerbic wit we also have in common it’s really a no-brainer (aren’t I oh-so-modest?). Truth be told I’m not the biggest fan of his movies, but I think he’s a really cool guy, and I take getting compared to him a massive compliment. 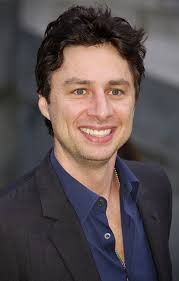 Now this one obviously has nothing to do with physical appearance, but it comes from my wife, so I will give her the benefit of the doubt when she says that based on his talk show appearances Zach Braff and I have a similar sense of humor. I made sure to let Mr. Braff know on Twitter that I know he must be funny since my wife said that and, as I mentioned in my last post, I’m clearly hilarious.

Still waiting for a reply, fourteen months and counting. So tell me people, liven up the drab day I’m about to have—who have you been told you remind people of, be it fictional characters or real people? Or better yet, who do you think reminds you of you?

3 thoughts on “What Fictional Character or Celebrity Are You?”