This post mainly serves as a way for me to knock the rust off, as it were. As you may or may not have noticed, I’ve been gone for a little bit. I’ll go into what caused my temporary absence sometime, but for now I’m just trying to get back in the water, so to speak.

Here are words I wasn’t sure I’d ever say: I saw a really good Woody Allen Movie recently. Don’t get me wrong, I have nothing against the man, and there are quite a few of his movies I might enjoy, but the ones I’ve seen, well, they just weren’t my thing (full disclosure—I haven’t seen any of the “classic” Allen movies like Annie Hall or Manhattan). Then I saw Match Point (2005). 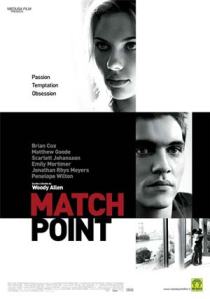 Jonathan Rhys Meyers stars as a has-been-that-never-quite-was tennis pro who takes a job as an instructor at a posh country club in London. He strikes up a friendship with one of his clients, then becomes obsessed with his friend’s fiancé, played by Scarlett Johansson. Meanwhile, his friend’s sister falls head over heels for him, so he begins dating (and eventually marrying) the sister mostly just to keep himself around the fiancé (and his wife’s family’s money), until finally initiating an affair. From there things unravel in quite an interesting—and intense—way.

The movie was a bit unusual in it’s pacing to me. It was sort of a fast-paced slow burn of a thriller. At times it seems like not a whole lot is going on, and yet the story really never stops moving. It was interesting from a storytelling point of view how little wasted time there was. Some scenes would literally be thirty seconds long, giving you just a glimpse of a character’s facial expression to show what they’re thinking/feeling before moving on to the next scene. It was the increasingly rare movie that didn’t feel too long or drawn out; the two hour running time flew by.

Near the end the police enter the story, and their handling of affairs borders on implausible, but the movie was so good that I felt I could let that slide. If you’re in the mood for a dark, intense couple of hours, give it a shot. The tone reminded me a bit of The Talented Mr. Ripley, though not as high a body count.

Now then, on to the title of the post—discovery.

As I’ve mentioned before, in my early twenties I worked at a retail record store (the fact that we didn’t sell actual vinyl records not withstanding). I clearly remember when LeAnn Rimes came out with her debut album, lots of older/elderly people would come in asking for the CD, all of them remarking “She sounds just like Patsy Cline.” I would think, Why do you want to listen to somebody who sounds like someone else? Why don’t you just listen to Patsy Cline?

There was another artist, the name escapes me (maybe D’Angelo?), that people would buy because they thought he sounded like Al Green. Again, I thought, Just go listen to Al Green. Which really isn’t too bad of advice, people. Seriously, put some Al Green in your life. I digress. The point is, now I think I get it.

I was reading about the goings on at SXSW and happened upon a sentence or two about a band called Radkey. I decided to look them up on YouTube, and well…holy crap. Three brothers from Missouri who play punk rock with just the right touch of melody and harmony (for my tastes, anyway—I’m not much for the really poppy sounds, if you haven’t been able to tell from previous posts), and hearing them felt like someone put jumper cables on my nipples and jumpstarted my head.

There’ve been the occasional bands I’ve come across in the last few years that I liked pretty good, but I seem to keep drifting back to my comfort zone: music from the 90’s and early aughts. Nothing I found recently really moved me except for a select few: Red Fang, which is really up my alley but still not totally freak out worthy; Sharon Jones and the Dap-Kings, whose funk stylings are awesome but sometimes veer too far to the R&B/soul for my tastes; and OFF!, whose brutal attack of songs are great but short—you can listen to their first four EP’s in less time than it takes to watch a sitcom (without the commercials).

All of which makes Radkey that much more special to me. For the first time in years I found a band that’s actually out right now that I like a lot. Part of what makes them so exciting is how young they are—both in the literal sense and also as a band. They managed to get attention early on and are getting breaks fast, having put out only two EP’s so far. To be able to track their progress in the industry and see how they grow as a band as it happens is something I haven’t done in a long, long time.

Are they perfect? Hell no, far from it. A couple of their songs are kind of generic, and all three brothers are far from virtuosos (the drummer is adequate at best). But that’s the beauty of punk rock—you don’t have to be a master of your instrument, you just need the passion, energy, and emotion, and as long as that comes across in your music, why, you’re just fine. And they’re only going to get better.

Now, I know a lot of you may not share my taste for this particular slice of musical pie, but if you’re so inclined, give ’em a whirl. They have a definite Ramones influence, and at times the singer/guitarist sounds an awful lot like Glenn Danzig, giving them a Misfits vibe. There’s more to them than that of course, so if you’re into that kind of thing check them out. You can visit their website and stream their EP’s here, or you can find performance clips on YouTube—I’ve included a link to my favorite song of theirs, Out Here In My Head, live on Later…with Jools Holland.

And with that, I think I’m officially rust free. 🙂

4 thoughts on “On The Joy of Discovery”