Do you guys listen to This American Life on NPR? It’s one of my favorite shows, running the gamut from serious to comedic, light-hearted to heart wrenching, sometimes in the same sixty minutes. Well, this post isn’t about This American Life, but it does have to do with Ira Glass, who serves as the show’s host, as well as being a TV and movie producer, writer, and all around cool-seeming guy.

When you struggle with writing, you tend to look for things to make you feel better, like it’s not a lost cause; like all the crap you’re going through is going to be worth it somehow, someday. And if you search enough, you’ll find the same tips, the same advice over and over, until it’s all a bit redundant and (in my opinion) not all that helpful. There is one quote I’ve come across a few times, though, that really made an impact, and it comes from the aforementioned Mr. Glass.

“Nobody tells this to people who are beginners, I wish someone told me. All of us who do creative work, we get into it because we have good taste. But there is this gap. For the first couple years you make stuff, it’s just not that good. It’s trying to be good, it has potential, but it’s not. But your taste, the thing that got you into the game, is still killer. And your taste is why your work disappoints you. A lot of people never get past this phase, they quit. Most people I know who do interesting, creative work went through years of this. We know our work doesn’t have this special thing that we want it to have. We all go through this. And if you are just starting out or you are still in this phase, you gotta know its normal and the most important thing you can do is do a lot of work. Put yourself on a deadline so that every week you will finish one story. It is only by going through a volume of work that you will close that gap, and your work will be as good as your ambitions. And I took longer to figure out how to do this than anyone I’ve ever met. It’s gonna take awhile. It’s normal to take awhile. You’ve just gotta fight your way through.”

That really hit home for me. It pinpoints what I’d been feeling for quite awhile but couldn’t put my finger on. I was fairly happy with the things I’d written, but I just knew something was off. And then, a couple of days ago while looking for something in my basement, I found this: 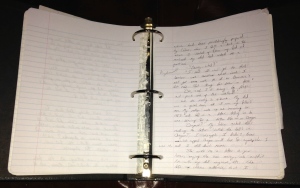 It’s the second ‘extended’ story I ever wrote, back in 2000 when I had just started a new job. I worked split shifts, meaning four hours in the morning, then a few hours off, then four more hours to finish the work day. My wife (girlfriend at the time) and I were sharing a car, so I was stuck there during the 3-4 hour break and I did what seemed like the only logical thing—I wrote.

I remembered writing the story—about a down-on-their-luck couple in love who concoct a plan to rob a bank—but I didn’t know I’d saved it. I thought it had been lost or trashed years ago. I sat down and  started reading it and realized a couple of things.

It sucks. Naturally, of course it does. But it doesn’t totally suck. The bones of a good story are there, it’s just not very good due to several factors: wooden characters, stiff dialogue, plot problems, etc. But the thing is, it highlights what Ira Glass said. I can see what the then 26 year old me was going for. If you want to get right down to it, my ideas for stories nowadays aren’t all that different (it seems I’m destined to primarily be a crime writer, as that’s what tends to come naturally). But the taste far outweighed the talent.

That story (titled Karmic Justice—it came to me as I’ve been typing) was the last thing I wrote until I started back up a couple of years ago, and I’ve been bridging that taste/talent gap ever since. Are they equal? No. Not quite. Not yet. But it’s getting there, and finding this little gem in the basement (and comparing it to what I’m working on now) has helped drive home just how far I’ve come.

So while it may not apply to everyone, if there’s something you do that you’re still trying to get better at—writing, photography, music, cooking, woodworking, whatever it is—go back and look at (or just think about) some of your early stuff for a reminder of how much progress you’ve made.

Because once your taste=talent, there’s no stopping you.

2 thoughts on “Taste vs. Talent”