In  the pantheon of great motivational speakers, certain people come to mind:

Saturday night, thanks to an overwhelming sense of curiosity and a girlfriend who’s always up for something new, saw me at a venue normally associated with rock performances, hosting a rock singer. This, however, was different. It was a spoken word appearance by self-proclaimed King of Partying Andrew W.K., as part of his 50 state The Power of Partying tour. 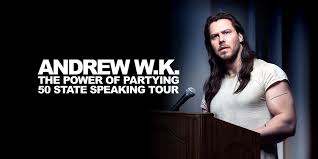 What I knew going in: I knew of Andrew W.K., as I suppose a lot of people might, from the 2001 hit single “Party Hard” (which, along with some other singles, has popped up in various video games) and from the now-iconic album cover featuring W.K. with one doozy of a bloody nose. Beyond that, all I knew was that Andrew had parlayed the party lifestyle he’d become famous for into serious motivational speaking gigs framed by his own rock ‘n’ roll viewpoint. He had some material prepared, but a large chunk of the evening would be open to Q & A from the audience.

Side note regarding the venue: I can’t believe it took me over a decade to finally go to Barleycorn’s. The place was cleaner, nicer, and smaller than I expected. Over the course of the night I must’ve remarked at least three different times “I really like this place.” I can’t wait to go back and see some bands, as with a capacity of only around 250 people there is literally not a bad seat in the house.

What I found upon arrival: Free pizza? Are you kidding me? Okay, the guy knows how to start a party—music, pizza, and alcohol. We got settled into one of the few remaining seats with our party accoutrements, and not a moment too soon—the show uncharacteristically (for a typical rock show, anyway) started right on time.

Andrew began the show by getting what I would’ve called in my prime pro wresting watching days “a cheap pop”—pandering to the home crowd for some easy applause. And yet, right off the bat I felt a vibe coming off W.K., in all his white jeans/plain white t-shirt wearing glory: the dude was completely genuine. There was no pandering, he was actually happy and excited to be there in Wichita, KS.

He spoke about the rigors of a 50 state tour, and how if he’d taken any time to think about it before committing he may have reconsidered. Before long, he got to the topic at hand—what it means to party in Andrew W.K.’s world.

So, what does “party” mean to man who’s practically made a career out of the word? A lot of things, actually. Positivity—being upbeat, finding the silver lining, etc. He spoke of having feelings of melancholy since he was a little boy, and how music helped him (then and now) weather the storm of negativity and gloom that would seemingly invade his thoughts.

One thing that really resonated with me was this (paraphrasing slightly): “Some of the biggest sparks of inspiration can come from the lowest of places. If you know how to acknowledge that bad feeling and roll with it, you can create something incredible.” I know exactly what he meant, as I’ve had a lot of bad things to draw inspiration from in the last year or so.

Although he didn’t use the term, a lot of what he touched on related to the concept of mindfulness. I’m nowhere near knowledgeable to go into detail about it, but if I had to try and sum it up in a sentence, it involves learning to acknowledge feelings and sensations as they happen without judgement (plus an awful lot more—again, I’m no expert). A major part of mindfulness is meditation, and while certain aspects appear to be easier to grasp than others, it seems incredibly beneficial to your mental and physical well-being if you can get a handle on it. You can learn more about mindfulness (highly recommended) by clicking here.

Upon opening the floor to questions, I was surprised how many people wanted to ask Andrew about coping with depression. I expected more rock ‘n’ roll stories from the road, or meeting celebrities, that sort of thing. (One guy asked about his high-energy live shows and W.K. described it as “chaos with a smile”, with raging mosh pits that would stop everything to help someone look for their glasses.)

My favorite exchange of the night was when a young woman asked him how she could help a friend who suffered from chronic depression and sometimes had suicidal thoughts. Without a moment’s hesitation he said, “Love them.” He went on to elaborate on that, but I (along with everyone else in the venue) was struck by the touching simplicity of his answer.

After the Q & A session, W.K. invited anyone who still wanted to talk or take pictures to come see him in the back of the bar by his merch table. Almost everyone in the room got in line to talk to him, or so it seemed. I was positioned to be able to see him with just a slight turn of my head, and I admit I enjoyed watching him interact with his fans, for a couple reasons.

First, just the act of hanging out like that to meet people and talk to them is a cool thing to do. He didn’t have to do that. It took upwards of 90 minutes for him to talk to everyone, shake every hand, take every picture. Second, he wasn’t just going through the motions. He was there, in the moment, with everyone who came before him. Eyes locked on theirs, listening intently to whatever it was they had to say to him. That really spoke volumes about the kind of guy he is, and I have to say it left me pretty impressed. That’s not to say he didn’t make a bee line out of there once the line was gone, but still. Just an awesome guy.

What I learned:  I learned that even guys who seemingly never have a bad day still struggle with their own demons. In the case of Andrew W.K., those don’t seem to be the typical rock ‘n’ roll demons of drugs and alcohol (I don’t think he even had a drink after the show, even though I’m sure people would’ve lined up to buy him one), but much more common ones: depression, self-worth, seizing the day, etc. It was nice reinforcement to know a fellow death metal loving oddball goes through it too.

W.K. mentioned he was about 1/3 through his 50 state tour, if he comes to your town I highly recommend catching him. He’s a good guy with a good message, and given the year I (and the nation) have had, you really can’t have enough people like that. Here’s a link to his remaining tour dates, check him out.