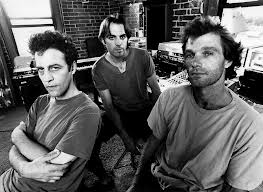 I still remember the first time I heard Morphine. It was the summer of 1998. My girlfriend put on their CD, Like Swimming.

It instantly grabbed my attention, and never let go. I was stunned by it. I play guitar, and found myself fascinated by this power trio that didn’t even have a guitarist. At the time I worked in a music store, selling CD’s all day long. I was pretty conscious of all different types of music, but I had never heard of these guys. When I went to work the day after hearing them, I went to the rock/pop/soul section and started searching the M’s. Sure enough, there it was. We had one copy. Their older stuff was on an indie label, and we didn’t carry it. I special ordered their back catalog and soon was neck deep in their music. I wondered where this band had been all my life—no one (then or since) sounded like them.

How to describe Morphine to the uninitiated? As I mentioned, there is no guitar. The lead instrument is actually saxophone, usually baritone, played by the incredible Dana Colley. Some songs had two saxes playing simultaneously, which may not pose a problem in the recording studio, but Mr. Colley pulled the songs off live by playing two saxophones at the same time.

For most of their career, Billy Conway handled the percussive duties, with Jerome Dupree behind the drums for their early records.

Then there’s Mark Sandman. He basically was Morphine. He was the bassist and vocalist, but the way he handled both was what made the music so unique. He took the typical 4-string bass and turned it on its head. He removed two of the strings, tuned the two he had unconventionally, and played with a slide instead of his fingers. The result is kind of hard to put into words. Which sucks, because it was my bright idea to write about them.

Then there’s his voice. A natural baritone, his voice, combined with the slide bass and baritone sax made for one of the most unique harmonies I’ve ever heard. And I thought I’d heard it all.

There are a lot of reasons I like Morphine so much. For one, despite the seeming limitations that you might think they would face because of their setup, they had an incredible range. They could play bluesy grooves all day long, turn it up to all-out rock, or play tender, soft songs with ease. Essentially, they were fearless. You got the sense they were playing what they wanted to play, and if people happened to like it, that was great. And no matter what type of song they play, you know who you’re listening to as soon as you hear it. They managed to have a distinct, signature sound without having every song sound exactly the same.

The other big thing I found when I got into Morphine was that I loved the lyrics. Now, I’m a child of rock, punk, and metal, and lyrics are often an afterthought—mostly meaningless and unintelligible. Honestly, I don’t have much problem with that. I lived my whole life without really caring too much about lyrics. But when I listen to Morphine, not only can I understand the vocals, they actually mean something. They tell stories, and they make sense. Morphine was the first band that made me actually appreciate lyrics, and see what an extra impact good lyrics could have on a song.

Sadly, Mark Sandman died on stage of a heart attack in 1999, during a show in Italy. So right after I discovered them, it became impossible to see them live. That was a difficult reality to face. Luckily, there are clips of them on youtube to give you a sense of what their live shows were like.

As far as their catalog, you really can’t go wrong with any of their work, but my recommendation would be the album they had just wrapped up before heading out on that ill-fated tour in 1999, The Night. It’s my personal favorite, and shows their range. Start there and work your way back through their albums, or start at the beginning with Good, and see how they evolved over the years. Or just go on Pandora and start a Morphine-themed station. Just do yourself a favor, and check ’em out. You won’t be sorry.