We’ve all heard that change is good; we should embrace change. I feel like I’ve done a pretty good job at that the last couple of months, to be honest. New job, schedule all over the place. Not that I’m complaining—far from it, I love my new job—but finally I’m back into a routine and I’m so relieved, because now I might be able to get seriously back into writing again.

It hasn’t been absolutely zero productivity these last couple months, though. I managed to write a few stories, two of which I really like and the other I think will end up being cannibalized and put into a different idea I’m chewing on in the back of my mind. But the Big Work In Progress, the novel, has set idly by since around Memorial Day. I just haven’t had the time or energy to think about it. Well, that and I had some ideas that would require going back and either adding scenes in or rewriting altogether. At this point I don’t know which I’ll do; the fact that I finally have the time to do either is what matters.

All this means I’ll probably have more time for the blog again as well, so set you blocking preferences accordingly. 🙂

Oh! I can’t believe I got this far without mentioning it: I got another story published!

My short story Randy’s Bad Day is being published by Jitter Press, a division of Prolific Press specializing in horror and dark fiction. Details are still to come, of course, but you know I’ll be passing them along as I get them. It’s the story of an angry man in a cabin, his hangover, and a whole mess of mutant frogs. They say you should write the kind of stuff you’d like to read, and I definitely did that with this story, because it’s gross, scary, and, dare I say, funny. It makes me laugh, anyway. I hope you guys like it.

I also got a pair of very encouraging rejection letters a couple of weeks ago, which, as weird as it sounds, it really cool. One told me they liked my story but it wasn’t right for the issue they’re getting ready to put out, and asked me to send more work in the future. The other said my story was “a hell of a lot of fun” but needed just a bit of tweaking, in their opinion, and it could find a home easily. We’ll see about that, but it was a nice way of being told ‘no, we don’t want your story.’

I’m going to cut this short, because as happy as I am to have a routine again, I’m still getting used to it. I work much later in the day now and my days off are in the middle of the week, so there are some adjustments to be made before I’m totally used to it. So I’m gonna go and read for a while (if I still remember how—my reading time has been cut drastically short lately, too) and relax a little before heading to work. But there will be more to come, so stay tuned. 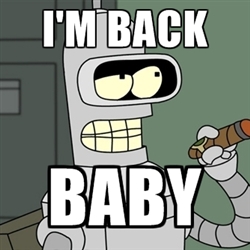 8 thoughts on “Finally, a Routine”