Reading is kind of like eating (just go with me here): Sometimes you want a luxurious, elegant meal by candlelight, complete with fine wine and classical music. Other times you want homestyle meatloaf with mashed potatoes, or chicken fingers, or maybe a big plate of chili cheese fries with an ice cold beer. Mmm…chili cheese fries.

Where was I? Right. Mockingbird, Chuck Wendig’s sequel to Blackbird and book #2 in the Miriam Black saga, is pretty close to literary cheese fries, and I mean that as a complement. 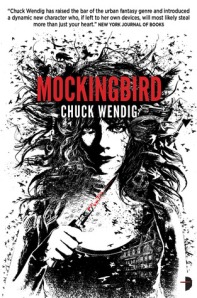 In this installment, we find Miriam trying to live without relying on her “gift” of being able to see how and when someone is going to die by the mere touch of skin on skin. Frustrated and feeling out of step, Miriam quits her job and goes into a brief tailspin until her on again/off again boyfriend Louis tells her he has a way she can make a few hundred dollars easy—if she wants to go back to her old ways.

Despite knowing taking the job may disappoint Louis, Miriam takes the job and goes to an all-girl reform school to meet one of the teachers and tell her how she will meet her demise. What starts as a simple task quickly turns into Miriam’s gift giving her a horrific glimpse of a serial killer at work. From there it’s off to the races as Miriam must find out who the killer is with very little to go on and stop them before they strike again.

And therein lies the beauty of the story and the genius of Wendig. He takes what could’ve easily been a dull retread of the first book and gives us instead an original story that doesn’t use Miriam’s gift as a cheap gimmick. There were times I actually forgot she had said gift, and when it came into play it was timed brilliantly. The people at the STARZ network evidently agree, as they’ve tentatively agreed to create a series based on Miriam’s adventures. If done right, the show could be great fun to watch.

Another thing I really liked, without giving anything away, is that Wendig leads you to an inevitable climax, then the story reaches that climax and seems to resolve itself at the 75% mark. When you still have that much book left and what you thought would be a somewhat predictable ending has already happened, that keeps you guessing and wondering what on earth is going to happen next. Very cool.

Of course, these books come with the requisite ‘not for everybody’ tag: like the first, the book is peppered liberally with creative uses of profanity, and Miriam is a character with a tongue like a razor blade. At times her dialogue borders on unbelievable, but these books are too much fun for me to care. I should also note that Wendig has other books that deal with the supernatural and is putting out a dystopian young adult trilogy, so if the Miriam Black books don’t sound like your cup of tea don’t dismiss other titles of his without giving them a shot.

Regardless of what happens with the TV deal, there’s already another Miriam Black book out, The Cormorant, and Chuck shows no signs of stopping the series anytime soon. I’ll take my time before I read the next one, though. If I read them too close together I’ll have a long wait before a new one comes out, and that’s no fun. In the meantime I’ll just wait until I have another hankerin’ for chili cheese fries.