This is a sort of pop culture wrap-up for my Saturday (and again, my Saturday=your Sunday). I finished the book I was reading and my wife and I squeezed in three—count ’em, three—movies, and it turned out to be a mini James Gandolfini marathon. Aside from the movie Thirteen, starring Holly Hunter and a teenage Evan Rachel Wood (which was a good fly-on-the-wall look at a good girl’s turn toward the dark side, and is BOJ certified as recommended, but didn’t knock my socks off), the book and both Gandolfini movies subverted my expectations, for better or for worse. I’ll start with the ‘for worse.’

Killing Them Softly had been on our DVR for quite awhile—if you couldn’t tell by now, I’m a sucker for gritty crime drama, noir, hitmen, etc. When you have a cast as strong as this one—Brad Pitt, James Gandolfini, Richard Jenkins, and Ray Liotta—I’m in.

It wasn’t a bad movie by any means, it just seemed to miss the mark a little bit. The plot is as follows: three men are responsible for knocking off an illegal gambling ring, knowing the head of said gambling ring (Liotta) will take the fall. Pitt’s character is brought in by an attorney to the mafia (Jenkins) to figure out what happened, who’s to blame, and who’s going to die. Gandolfini’s character is brought in to help carry out one of the hits.

What seemed like it should’ve been a pretty straightforward plot was unnecessarily messy and hard to follow, ending rather abruptly and leaving my wife and I with questions like, “What happened to ____?” and “Who the hell was _____, anyway?”

It was also a bit heavy-handed with political tie-ins—the movie takes place during the McCain-Obama campaign run, and ends on election night. At the very end it becomes more clear why the tie-ins are there, but it still could’ve been handled with a little more subtlety.

It felt at times like a Tarantino/Scorcese-light kind of movie: aiming high but falling short. If you’re into these kinds of movies like I am I would still give it a go. It’s well-shot (with some stomach-turning graphic violence handled nicely, in my opinion), and well-acted. James Gandolfini is awesome (if ultimately irrelevant to the plot) as the unhinged, unstable hit man brought in to help Pitt’s character. If you don’t typically like these kinds of movies, you probably won’t care much for it.

Chuck Palahniuk seems to be what I’d call an “avocado” author: people tend to either love him or hate him. I can’t fully fall on the love side, but I like a lot of his work. I’d heard Rant was really good without really knowing much about the plot at all, so when I got the chance to check out the e-book from my library, I took it.

**(side note: did you all know you could recommend e-books to your local library for them to purchase using the Overdrive app? I don’t know about other cities, but the lovely folks at the Wichita Public Library have bought two books on my recommendation, and I think that’s downright awesome)

It starts as a character study of Buster “Rant” Casey, a backwoods country bumpkin who as a kid has an affinity for getting bitten by insects and vermin, picking his nose and sticking the boogers on his wall, and finding valuable coins.

We follow Rant to an early diploma from high school, where he moves to the city and the story takes a turn into sci-fi territory, as we learn society has been divided between the respected “Daytimers” and the lowly “Nighttimers”, with a strict curfew to keep the two groups from intermingling. Rant falls in with the Nighttimers and into a social circle known as Party Crashers—an organized sort of after-hours demolition derby that takes place on the city streets. To give much more away would ruin the book.

About 2/3 of the way through the book I was interested in the story, but starting to get a little bored. After reading the last third in one long stretch, I felt dizzy. The book goes from taking a turn here or there to spinning like a top until you don’t know up from down, left from right, or father from son.

The “hook” of Rant is in the way the story is told. The official title is Rant: An Oral History of Buster Casey, the key words being ‘an oral history.’ The book constantly changes perspective as different characters give their accounts of the events that unfolded in Rant’s life, sometimes outright contradicting each other. Kind of like a documentary or a special on TV, the way they jump from one talking head to the next. It’s used to great effect, but also made me wonder—

Where’s the line between originality and gimmickry? One of the complaints I hear about Palahniuk is that he’s a gimmick writer, with nearly every novel using some kind of cheesy narrative device to tell the story. There’s no denying he uses different techniques to tell his stories, and I can see the ‘gimmick label’ being applied. The thing is, is it only a gimmick if it doesn’t work?

Pygmy, Palahniuk’s widely hated 2009 novel told via the journal entries of a 13 year-old foreign exchange student/terrorist in badly broken English, is downright tough to read (I think I liked it more than most), and dismissed as a gimmick. Rant, on the other hand, is held in much higher regard, and the ‘oral history’ gimmick isn’t mentioned as much. I don’t necessarily think every book by an author has to have some kind of gimmick to tell its story (I sure hope not, because my storytelling thus far is pretty straight ahead), but wouldn’t the literary world be a boring place if there weren’t people like Palahniuk taking chances with their stories? 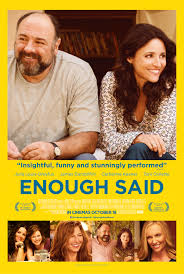 The last subverted expectation was also the most pleasant surprise. I suppose it would come as no shock that I’m not the world’s biggest fan of “chick flicks,” but I try not to discount them altogether, because I know there are some good ones out there. I’ve confessed before my liking for my wife’s favorite chick flick, Return to Me, and last night found one I liked just as well, if not better, with Enough Said.

The film takes what on paper sounds like a fairly standard chick flick or rom com plot—masseuse meets a man and woman separately, begins dating the man and takes on the woman as a client/friend, only to find out they’re ex-husband and wife—and handles it fairly realistically, playing it straight for the most part, but with plenty of chuckles thrown in (and one moment involving a baseball in a drawer that had me laughing so hard I nearly fell out of my chair, thanks to Julia Louis-Dreyfus’s impeccable comedic timing and delivery).

All the characters in the movie felt like real people, not one dimensional and flat or caricatures like in a lot of movies (and books, for that matter), and the dialogue felt realistic and smart. There was also a subplot I liked with Dreyfus’s character subconsciously replacing her daughter, who was preparing to move off to college, with her daughter’s friend. None of the characters were perfect, none of them were total a-holes (although I must admit I didn’t care for Catherine Keener’s ex-wife famous poet character—I’m beginning to wonder if I just don’t like Catherine Keener), they were just fairly normal people with flaws like anybody else. It was well-written and wonderfully acted, and I was glad I watched it. I had expected to look up from Rant every so often to make sure I was following along with the movie, but found myself with my book (phone) in my lap, all my attention devoted to the movie.

All in all a great night with my favorite person, and a good way to recharge the batteries for writing and some very likely overtime in the coming week.